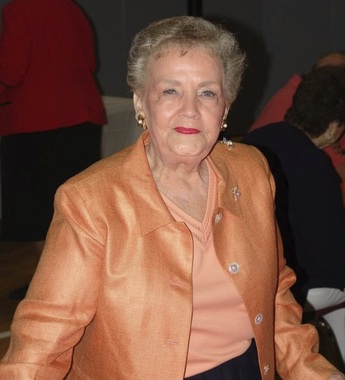 Back to Joan's story

Joan Marie McIntyre, 86, of Round Rock, Texas, passed away on Jan. 24, 2019.  She was born on Sept. 2, 1932 in Dallas, Texas, to James N. Simmons and Chellie Smith. Her hometown was Rockwall, Texas and her maiden name was Joan Simmons (all her friends and family called her "Jo".)
Mrs. McIntyre was a member of New Hope First Baptist Church and was a member of their Joy Class. She was an avid fan of the University of Texas Longhorns football program and especially of the Westlake High School (Austin) Chaparrals where all five of her children attended school.
She was preceded in death by her parents, Chellie Smith Dunn and James Simmons; husband, Ray McIntyre; sons, Jimmy Sparks and Rob Sparks; sister, Bettye Gunn; and brothers, James W. Simmons and Charles Simmons.
Mrs. McIntyre is survived by her children, Scott Sparks of Round Rock; Randi Sparks of Austin; and Marc Sparks and wife Jane of Dallas; grandchildren, Dustin Sparks; Lauren Carter and husband Craig, Gabe Chambers, Aubrey Sparks, Austin Sparks, Adam Sparks, Shea Marie Sparks, and Aaron Sparks; many great grandchildren; numerous nieces and nephews; and her beloved dog and companion, Bailey.
Visitation will be from 1-2 p.m. with funeral services at 2 p.m. on Saturday, Feb. 2, 2019, at New Hope First Baptist Church in Cedar Park, Texas. Burial will be in Restland Cemetery in Dallas, Texas.
Contributions to the Gideons for Bibles can be made in memory of Joan McIntyre.
Arrangements under the direction of Beck Funeral Home, 1700 E. Whitestone, Cedar Park, Texas 78613 (512) 259-1610.  On-line obituary at www.beckchapels.com.
Published on January 25, 2019
To plant a tree in memory of Joan Marie McIntyre, please visit Tribute Store.

Plant a tree in memory
of Joan

A place to share condolences and memories.
The guestbook expires on April 25, 2019.

Restore the guestbook to view the 1 more posts by family and friends, and share a memory or message of condolence of your own.